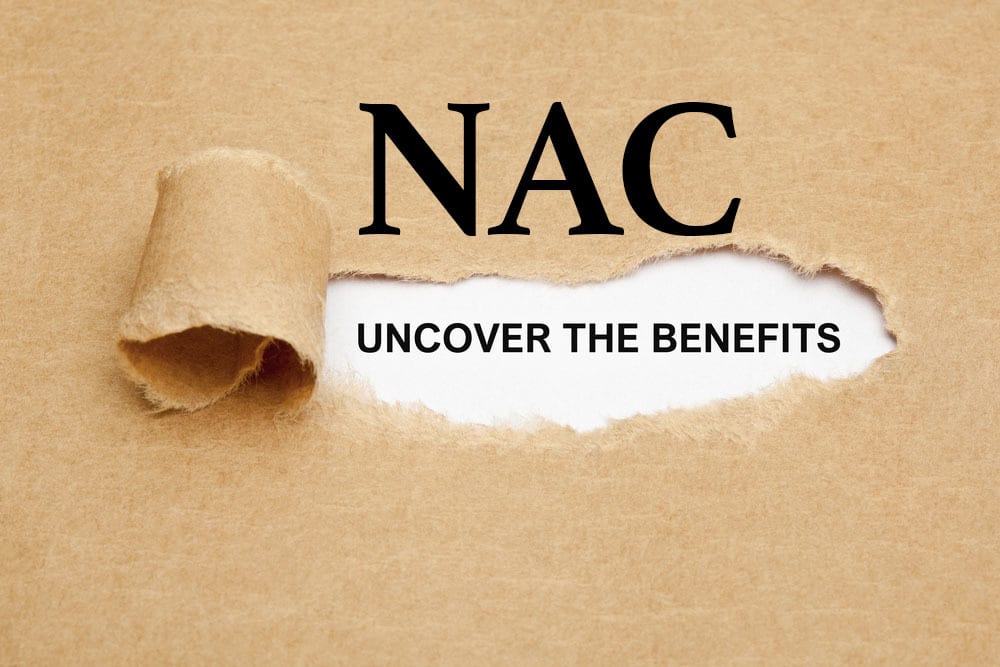 Biochemical processes and reactions rely on amino acids to a significant extent. And one of the most important amino acids is cysteine.

Cysteine refers to a semi-essential amino acid, and the body can produce it using other amino acids. N-Acetylcysteine (NAC), on the other hand, is an amino acid supplement that transforms to form cysteine.

Because of the power that cysteine holds and the fact that cysteine levels drop when your dietary intake of serine and methionine amino acids is low, supplementation with N-Acetylcysteine (NAC) is often essential.

NAC is, therefore, one of the other important antioxidant molecules, and it boasts far-reaching benefits to the body by influencing your sleep, helping with mood disorders, inflammations, and even infections.

How does N-Acetylcysteine (NAC) work?

In case of a depletion of endogenous GSH and cysteine, NAC steps in and functions as a direct antioxidant for radical oxygen species HOX and NO2.

Remember that the antioxidant effects of cysteine and NAC are essential for the protection of DNA, tissues, organs, and cells from inflammation, damage, as well as the effects of harmful substances.

While the powerful antioxidant effects standout as the primary function of N-Acetylcysteine (NAC), this is not its only role.

There are numerous other roles played by NAC and today we uncover 7 of its most interesting benefits.

With excess oxidative stress as the primary cause of cellular damage, a situation that spurs the development of chronic illnesses, toxin exposure, and malnutrition, the replenishment of glutathione levels by NAC is the body’s best course of action in the protection of organs and cells from oxidative damage.

One study revealed that NAC boosted the body’s antioxidant state in only 8 days, reducing the markers of oxidative damage and enhancing glutathione activity in the process. And in another study, NAC increased the levels of red blood cells, RBCs and the RBC markers, hence better circulation.

As mentioned above, the primary role of NAC is the replenishment and increase in glutathione levels through the increase in cellular cysteine.

What we didn’t mention is the fact that the highest glutathione levels are recorded in the liver.

Therefore, the liver gets the highest level of protection from inflammation and free radical damage than the rest of the body. The high glutathione levels also offer liver protection from liver diseases or drug poisoning.

In the event of liver damage, a rise in oxidative stress, or inflammation, NAC swoops in and reduces the inflammation of the organ while increasing the levels of the antioxidant.

In one review, it was shown that NAC reduces liver damage in up to 85% of all reported cases. And a NAC injection’s more effective in enhancing liver function than glutathione; as shown in a study that involved 75 Hepatitis B patients.

If you’re suffering from COPD or any other lung disease, NAC could be all you need for recovery. Why? NAC reduces inflammation, as well as the excessive production of mucus – a common symptom of COPD.

How? N-Acetylcysteine (NAC) replenishes the levels of glutathione in the lungs, while breaking down mucus, reducing damage to the airways and also alleviating breathing difficulties.

Therefore, supplementation with NAC could prevent the worsening of COPD, improve lung function, and improve breathing by softening mucus.

If you’re struggling with depression, you might want to consider trying supplementation with NAC (of course, under your doctor’s supervision and guidance). The reason for NAC’s recommendation for depression lies in its ability to balance the brain glutamate levels. NAC also encourages the growth of new brain cells, and it reduces organ and cellular inflammation.

By acting on the glutamate levels and even the pathways, NAC alleviates the symptoms of depression while enhancing your overall function and mood.

The other potential reason for N-acetylcysteine effects on depression lies in its ability to lower oxidative stress in the brain.

Besides depression and the bad mood, NAC also helps persons with bipolar disorder/ mania. It boosts low mood and also alleviates the symptoms of the disease in bipolar patients.

After success in the initial tests on the effects of NAC in fighting addiction in animals, it’s now apparent that NAC could have the same affects in humans. The cysteine synthesized from N-Acetylcysteine enters the brain then normalizes the levels of the neurotransmitter, glutamate.  Glutamate is the neurotransmitter affecting the reward pathways activated by addiction. NAC rebalances glutamate levels.

For most patients with Polycystic Ovary Syndrome or PCOS, Clomiphene citrate is all they know, especially when it comes to reproduction and ovulation. But this medication doesn’t work for more than half the women prescribed.

But, NAC appears to offer better results as it encourages successful ovulation when added to Clomiphene citrate.

If you’re struggling with PCOS or know someone who’s struggling, you know that weight gain is a big issue they struggle with. NAC could also help with the weight issues by reducing the levels of blood lipids, as well as the fasting levels of glucose and insulin. It also lowers high levels of insulin, testosterone, BMI, and irregular menstruation.

These are only some of the few benefits of N-Acetylcysteine (NAC). There are many other benefits including improved skin health, treatment of sleep apnea, and can also help manage the side effects of chemotherapy. If you’re still asking yourself why NAC? check out our other articles.

NAC is short for N acetylcysteine. This is a powerful antioxidant and is used by the body to make glutathione peroxidase, one of the body’s most important naturally occurring antioxidants. It is relatively well studied for a variety of ailments.