Cymbalta (duloxetine) is a serotonin-norepinephrine reuptake inhibitor or SNRI introduced to the pharmaceutical market by Eli Lilly in the early 2000s. Consumers and healthcare professionals were not fully informed about the frequency and severity of the withdrawal effects. Eli Lilly conducted multiple studies in which 44% of short-term users and 51% of long-term users experienced withdrawal effects.

Tapering Cymbalta can be tricky as it comes in 20mg, 30mg, and 60mg capsules that contain beads/pellets. There is no liquid form of Cymbalta available and it’s not possible to compound it into a liquid. For full prescribing information: http://pi.lilly.com/us/cymbalta-pi.pdf.

For the drug’s protection, each bead inside the gelatin capsule has a polymer barrier or enteric coating to protect the drug from stomach acid. Therefore if the pellets are dissolved in water, the active ingredient will be destroyed.

The pellets cannot be crushed – the drug would not make it into your system and will be destroyed as soon as it reaches your stomach acid. This will cause immediate withdrawal.

The bead counting method can only be done if you are prescribed brand-name Cymbalta or the generic capsules containing 100s of tiny beads.

Important: You should be using all the same brand whether it’s generic or brand-name as well as the same capsule dose. You cannot mix 40mg and 60mg capsules as the beads contain a different amount of the active ingredient. These capsules are filled by weight. To find an average number of beads per capsule, you will have to carefully count the beads in several capsules. Then you can estimate how many beads amount to 10% of the dosage and manage your taper accordingly by keeping notes on paper showing the number of beads removed and equivalent Cymbalta dosage.

Any taper with a neurologically active drug should be done slowly, over the course of a couple of months at a minimum. With Cymbalta, slow and steady will win the race against withdrawal symptoms.

You will want to start by removing 10% of your original dose per month. This 10% will be calculated on your LAST dose (The amount of the reduction gets progressively smaller). You may need to increase or reduce the percentage depending on how you are tolerating the taper.

Let’s say the dose you’re on is 60mg a capsule with the average beads count being 200 (this is an estimate please count the capsules yourself).

The taper dosage will be as follows:

Until you hit the minimum number of beads.

Put unused beads into a clean, dry, and sealed prescription bottle marked with the dosage of the original capsule and expiration date. You may need these later. WARNING: Do NOT mix beads of different dosages in the same container.

NOTE: When taking your loose beads, they can be funneled into gelatin capsules for easy swallowing. Swallowing the beads themselves has a possibility of causing throat irritation.

The generic form of Cymbalta can come in capsules with beads like the brand-name, or 4 to 12 “mini-tablets”. From Lupin Pharmaceuticals.

“Duloxetine is available as delayed-release capsules:

A gradual reduction in the dose rather than abrupt cessation is recommended whenever possible. If intolerable symptoms occur following a decrease in the dose or upon discontinuation of treatment, then resuming the previously prescribed dose may be considered. Subsequently, the physician may continue decreasing the dose but at a more gradual rate….”

These “mini-tablets” should NOT be split or dissolved to make liquid, much like the brand-name. These are suggestions for gradual tapering:

WARNING: Always make sure you count the total number of beads contained in your capsules, only use this information as an example.

The smallest possible dose of brand-name Cymbalta is one bead. Many people have stated online that they have had more success tapering Cymbalta one bead at a time. This is what we call a micro-taper and it seems to be a more tolerated method when tapering this drug. With this taper, you can try reducing the dose more frequently. For example, removing one bead from the gelatin capsule a week to test the waters at first and increase if your nervous system allows.

Switching to Prozac or “bridging” is another well-known method when tapering off an SNRI and has been known to be used with tapering Effexor.

Many doctors suggest at a “normal” dose of Cymbalta (30-40mg) they switch to 10mg Prozac with a week overlap. Meaning, you will take both medications for a week and then drop the Cymbalta on day 8 and continue taking Prozac. Prozac is not withdrawal-free, although, given Prozac’s long half-life, tapering should be quite a bit easier than counting Cymbalta’s beads. Prozac can also be obtained in liquid form.

As Cymbalta is an SNRI and Prozac (Fluoxetine) is an SSRI, taking both together can run you the risk of serotonin syndrome, since their impact on serotonin can be additive. This will make it tricky to switch over from Cymbalta to Prozac.

Guides such as this one recommend tapering off the SNRI initially, then incorporating the fluoxetine – https://www.ncbi.nlm.nih.gov/pmc/articles/PMC4919171/.

Another helpful guide is based on the Maudsley (UK) recommendations and advises a careful cross-taper with low-dose fluoxetine – https://ww2.health.wa.gov.au/~/media/Files/Corporate/general documents/WATAG/WAPDC/Antidepressant-switching-strategies-March-2013.pdf.

Here’s a Canadian doctors’ report also suggesting a cross-taper that appears like it has the same sources – http://www2.gov.bc.ca/assets/gov/health/practitioner-pro/bc-guidelines/depress_appd.pdf.

The article above recommends this useful web site for changing psychiatric drugs https://www.switchrx.com. The site recommends a swap of 30mg duloxetine to fluoxetine by cross-tapering.

Note: that the maximum dose of Prozac while taking any amount of Cymbalta is 10mg. 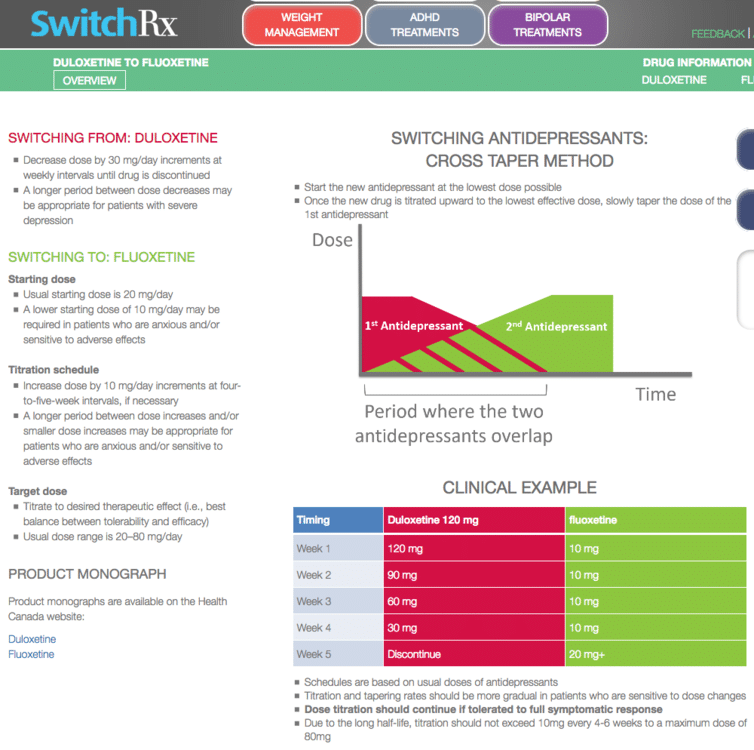 The process of reducing or tapering off psychiatric medication is inherently risky and can be especially dangerous and potentially life-threatening if done faster than one’s body can handle. The Cymbalta-Withdrawal project sets forth the information that relates to this process. Cymbalta-withdrawal shares such information on the website for the sole purpose of making it available for general educational purposes to those who are interested in it. The information does not constitute Cymbalta-withdrawal’s advice, encouragement, or recommendation that any individual reduces or tapers off of his or her intake of psychiatric medication.