For thousands of years, people have been using black seed oil because of its therapeutic effects as well as its host of health benefits. Thanks to the power held by the black seed oil, Islamic literature refers to the seed, that the oil is derived from as the “The Blessed Seed,” and it is believed to cure all illnesses.

With several studies suggesting that black seed oil might be the solution to many health issues, so it’s worth looking at why and how the black seed oil works.

What is black seed oil? 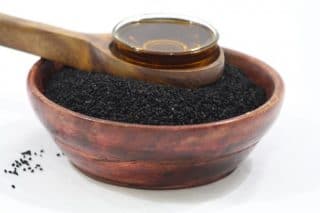 This seed is believed to cure or prevent a host of disease, an ability derived from its active ingredient thymoquinone. Thymoquinone is an anti-inflammatory agent and an anti-oxidizing agent that’s also believed to carry tumor-reducing properties.

The black seed oil can be ingested orally when available in capsule form or applied topically for skin-related benefits.

With high-quality black seed oil, you can use the extract in baking, cooking, and you could also add it to beverages.

The main benefits of black seed oil include:

The black seed oil is not only ideal for moisturizing the skin, but also for the treatment of various skin conditions. The Journal of Dermatology & Dermatologic Surgery, reports that the topical application of black seed oil on the skin helps in the prevention and reduction of acne.

Besides acne, this oil extract is also effective in the reduction of psoriasis incidences, as well as eczema. Also, the black seed oil is effective in wound healing thanks to its anti-inflammatory properties.

And as mentioned above, it softens the skin by moisturizing it and keeping your skin hydrated.

Black seed oil lowers blood pressure in persons with mild high blood pressure. While relaxing your blood vessels to lower blood pressure, it also lowers your LDD cholesterol, offering an extra layer of protection to the heart. With high LDL building up in the arterial walls and hardening it with time, reducing LDL cholesterol in circulation means a low blood pressure and a lower risk of getting a stroke.

The black seed oil also enhances cardiovascular health by flushing out excess fluids while also increasing the concentration of the nitric oxide which is needed for the relaxation of the blood vessels. This oil extract also acts as an antioxidant, and it reduces work on the heart by reducing fight and flight responses.

The heart-protective effects also come from the anti-oxidant effects of the oil. You need antioxidants to eliminate free radicals, also called ROS (l Reactive Oxygen Species). Free radicals damage cells and tissues and also cause inflammations. By neutralizing the radicals, the antioxidant in black seed protects the cells and the body from illnesses and organ damage.

Obesity is on the rise, and it’s responsible for most lifestyle diseases. Naturally, weight loss is the most effective way of curbing obesity and the associated illnesses like type 2 diabetes.

Black seed oil could be helpful in your weight loss journey thanks to the fact that supplementation with black seed will lower your BMI without causing any adverse effects.

Whether you’re dealing with type 1 or type 2 diabetes, studies show that black seed oil could help you deal with diabetes thanks to its ant-diabetic effects which result in the lowering of blood sugar levels. Also, it increases insulin sensitivity while activating the pathways for energy balance.

Note, however, that low blood sugar levels could be fatal. Therefore, you should speak to your doctor before you start supplementing. Also, it’s recommended that you only supplement with black seed oil while taking your medication.

The black seed oil extract has been used for years to protect the gut and to enhance digestion. One of the ways in which the black cumin oil enhances gut health is in its ability to eradicate Helicobacter pylori and the subsequent infection. It is also ideal for use with standard antibiotic therapy. Also, the black cumin protects the lining of the stomach from damage/ ulcers.

With conditions like arthritis and rheumatoid arthritis caused by inflammation, the black cumin oil extract rich in thymoquinone which is an anti-inflammatory agent, could prevent flare-ups and keep the swelling/ pain down. This oil also protects the brain from damaging inflammations.

Note that it’s anti-inflammatory effects also make black seed the ideal remedy for allergies and respiratory diseases. It is effective in the management of asthma symptoms.

Black cumin carries antibacterial, antifungal, antiparasitic, and antiviral properties meaning that its use could protect you from infections such as skin infections, H. pyroli infections, candida, hepatitis C, and even malaria.

Nigella sativa or black seed comes from a small flowering plant known for its white, blue or pale purple flowers. The plant is native to the Mediterranean region but is also found in Western Asia, Eastern Europe, as well as the Middle East. 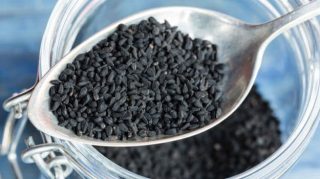 For over 2000 years’ people have been using the tiny black seeds of the black seed plant as a remedy for several illnesses. It’s also used to flavor curries, bread, and pickles. Its culinary use is similar to the use of oregano or cumin.

The first people recorded to have used the black seed extract for medicinal reasons are the Assyrians from Ancient Egypt. They referred to black seed as “tin tir,” and they took it orally as a cure to stomach issues. They also applied it on the skin to cure inflammations like rashes and sores. Dioscorides, the Greek Physician, recorded its use in the treatment of headaches, intestinal worms, nasal congestion, and toothaches in the first century.

Throughout history, it’s been used in pain management, in treating colds, and for soothing skin disorders.  In Ayurveda, the black seed oil is used for metabolic stimulation, reducing anxiety, and overall well-being.

Black seed oil is a very effective antioxidant and anti-inflammatory compound that has been utilized for thousands of years. There is supporting research it can reduce cancer risk, acts as a neuroprotective agent, and combats anxiety and depression. The oil mainly consists of a molecule called “thymoquinone”.